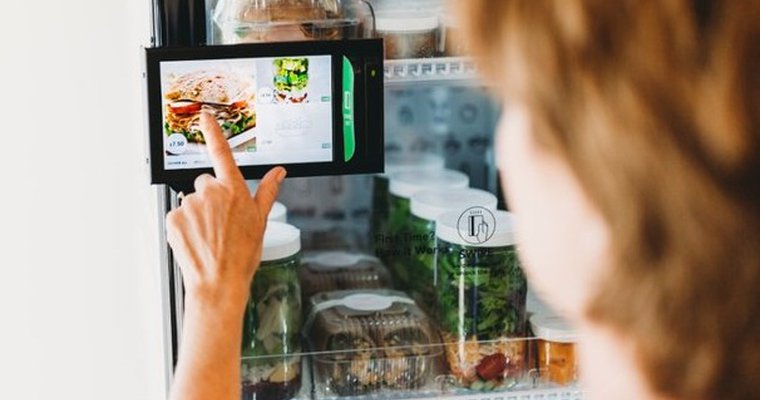 But the need for people to get a fresh meal quickly has never been greater than today.

And thankfully, state-of-the-art technology, in the hands of entrepreneurs bringing new ideas about fresh food vending, has created a new scenario.

This much was evident from a session at the recent Self-Service Innovation Summit in Hollywood, Florida, titled, “Ready-to-Eat Food Vending: The Revolution Continues.”

The panelists mostly represented companies that have expanded into vending from other industries.

Automat Kitchen is a concept based on the historic Automat that served freshly prepared food in coin-operated cubicles. Automat Kitchen delivers freshly made meals prepared on site to food lockers where customers retrieve their orders from cubicles with Internet connected LCD screen doors.

Coolgreens, a salad and sandwich restaurant chain that serves made-from-scratch food, was an existing foodservice business that expanded into food vending during the pandemic. In February of 2020, the company, active in Oklahoma, Colorado, Texas and Florida, launched Coolgreens Market, a “smart fridge” that utilizes the existing Coolgreens restaurants as commissaries.

Competition from third party delivery caused Coolgreens to look for other revenue streams, said panelist Todd Madlener, company president and COO. The company did not want to start its own delivery service.

Madlener and his team began exploring vending after noticing a line for a vending machine at the O’Hare airport in Chicago selling salads that was 30 people deep for an hour and a half. This was Farmer’s Fridge.

“They’re the big 300-pound gorilla in fast food or healthy salad vending and they do an incredible job,” Madlener said of Farmer’s Fridge.

But where Farmer’s Fridge had to create its own commissary to produce the food, Coolgreens realized it already had the commissary capability with its restaurants. They wasted no time finding a vending machine provider to help create Coolgreens Market.

Aramark Canada, which provides dining services to business and industry, healthcare and education, was also looking at new solutions in February of 2020, said panelist Louise Hudson, the company’s vice president of marketing operations. The company is now offering vending along with its manual foodservice.

Hudson said Aramark realized through research there have historically been four drivers for making a purchase away from home: quality, health and wellness, convenience and personalization. The pandemic added cleanliness as a fifth key driver.

The company also realized there were not many fresh food options for “third shift” employees in many organizations.

To address this need, the company researched options and discovered an automated pizza machine that offers freshly made (as opposed to frozen prepared), hot pizza in three minutes. The company began introducing its pizza machines about a year and a half ago.

“The pandemic accelerated our vision for automated food solutions and it will continue to grow, even though we will see a shift in consumer behavior as we move to a post pandemic situation,” Hudson said.

A caterer expands into vending

Upmeals, a caterer in Vancouver, realized traditional catering was not equipped to service corporate locations as efficiently as possible.

At one of its client companies, there was a full-time employee compiling dietary preferences and providing that information to catering companies to fulfill.

“We realized very quickly the way large companies were providing solutions to their employees was simply not effective and not efficient for a modern world,” said Drew Munro, company co-founder and CEO. “We said there must be a better way, and what if there’s a platform that was accessible 24/7 that had a bigger range of products and SKUs accessible at any time… and still had great food.”

Vending: An opportunity for retail

The Outlet Resource Group, which manages retail outlet centers, is currently working with Automat Kitchen to introduce its vending concept at retail.

“Food court operators are losing money hand over fist for the landlords underwriting the deal to try to keep them in business,” Hinkle said. “From my perspective, I’m thinking convenience, but also the ability to keep somebody there (at the retail location) longer.”

“It’s a great opportunity for the outlet sector to build your brand,” he said regarding food vending. Customers go to outlet centers to shop well known brands, which he called the original direct-to-consumer business model.

One listener asked about reaction of public health inspectors to food vending machines.

Baydale at Automat Kitchen said his company’s pickup lockers were designed with health inspections in mind by using few moving parts and sealed containers within the lockers.

Health and safety through temperature control was the top objective in selecting the vending machine that Coolgreens uses, Madlener said. The machine takes its temperature every 10 minutes. If it is over 40 degrees Fahrenheit for three 10-minute cycles, the machine shuts down and sends alerts to employees’ phones.

They also make sure that all products are placed in tamper proof containers, he said, and also have antimicrobial product that stays on the product 60 to 90 days, even though the machines are serviced daily.

“It is a bit of the ‘wild west’ out there,” Madlener said regarding state health inspections. “They (health inspectors) just don’t know what to do with us. It’s not a traditional vending machine.”

Munro agreed there is a gray area in the eyes of health authorities about how the food vending machines operate.

How to choose customer locations

One listener asked how the operators determine what customers will be successful and to give an example of a location that was not successful.

The panelists agreed that this is often a process of trial and error. One of the benefits about vending is you can move the asset to a better performing location, Munro noted.

Madlener said he pivoted away from retail locations during the lockdown to serving high rise residential.

“That did not vet itself out as hugely successful,” he said. “They had not taken into account that apartment dwellers have microwave ovens and refrigerators.”

What they needed was to not have to go out to buy groceries. “We probably should have put in more grocery style items,” he said.

Hudson said it is also important to consider what other services exist that are accessible to the location.

“Through that research, you can really understand where the opportunity gaps are,” she said. This includes knowing what times the competitive services are available.

It is also important to make the customer aware of your service.

“Make sure you have a strong marketing plan,” Hudson said. “Build awareness through social media through testimonials and sampling.”

Aramark had a social media campaign called “How it’s made” showing videos of how the food is made and also focused on the safety and cleanliness.

One reason marketing is important is customer attitudes about fresh vending are still a challenge, Munro said. He said demonstrations are needed. When a new install is done, they have employees offer free samples.

Once people used the machine a few times, it became a part of their daily routines.

“It’s been an uphill battle to get the acceptance of fresh food that is high quality and safe out of a vending machine,” Madlener agreed. “In the U.S., we’re just not there yet.”

One listener asked about customer pricing resistance to vend products.

Madlener said it has not been an issue since a high quality product is being offered.

The price points in the machine are lower than similar products in the restaurants since the vending machine utilizes the labor from the brick-and-mortar store and does not have to charge again for it in the machine.

In addition, vending machine product portions are slightly smaller than the restaurant.

“Pricing sensitivities are going to be one of the most important aspects of this business, not only what products are going to the machine…but what price points the users in that community are comfortable paying,” Munro said. He suggested doing research on the customers in advance of setting prices.

What about food waste?

Another listener asked about food waste.

Madlener said in airports, it’s 1% to 2%, and is usually caused by a customer taking and returning a product to the machine. Hospitals also have very little waste. But for commercial buildings, waste is the leading challenge.

There have been situations where waste was 30% to 40%, which he called “margin killing.”

Coolgreens needs to do a better job with commercial clients understanding when the heavy use days will be, which is challenging with hybrid work schedules, he said.

Hudson said Aramark’s waste is between 1% to 3%.

Munro said waste has to be figured into pricing. Controlling waste is a challenge that data is required to address successfully.